Liana Gynn was awarded the IBMS President’s Prize at the recent graduation ceremony at Plymouth University having graduated with a first-class BSc (Hons) Biomedical Science degree.  The President's Prize of £100 plus certificate is awarded to one student graduating from an IBMS accredited BSc Hons programme who has achieved academic distinction in a particular year who is also a member of the Institute. They must be registered as a member of the Institute at the time of the application. 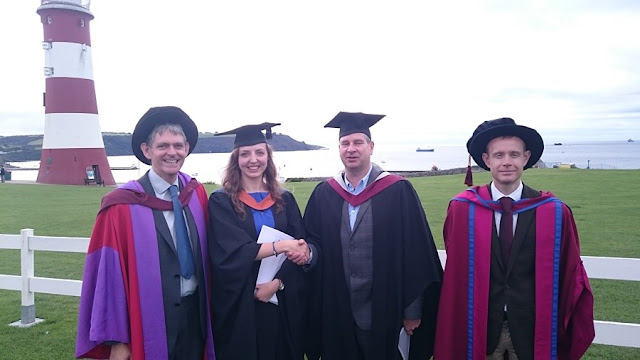 Liana took full advantage of the opportunities available at Plymouth and proactively sought a placement year in the Centre for Biomedical Research. During the placement year she helped to establish stromal/mesenchymal cell cultures and  optimized several cytotoxic and genotoxic assays including the comet and micronucleus assays to examine chemotherapeutic induced damage to bone marrow stroma. She showed initiative throughout her placement and has was very proactive in seeking advice and setting up collaborations to move the research forward.

“Gaining practical research experience was something that I was really interested in, and so I was lucky to have been able to assist in the research of Dr. Craig Donaldson as a year’s placement. This gave me invaluable experience of what real research entails and helped me develop skills on both an academic and personal level. These skills formed a much stronger foundation for my final year and inevitably led to the successes I have seen since. Having had such a positive time in research so far, I look forward to what lies ahead in a research-based career.”

In her final year Liana studied Transfusion & Transplantation Science, Biochemistry, Molecular & Cellular Pathology and Current Developments in Biomedical Science and her research project was “‘Characterisation of Human Stromal Cells Exposed to Conventional and Reduced Intensity Chemotherapy using Mass Spectrometry-Based Proteomics.” She was very self-motivated, conscientious and again her attention to detail was exemplary. She was awarded the Research Excellence Award (Highest Achiever in Research Project YR3) for the best final year project and the Academic Excellence Award (Highest Achiever Year 3) on the BSc Biomedical Science degree.
“Along with the School’s weekly seminars and the lab meetings I attended through my placement and final year, I have also enjoyed the opportunity to partake in research conferences. I attended the UKEMS conference this July, which was a four day event covering many aspects of toxicology and cancer prevention, as well as presenting a poster of my final year research project at the University’s Biomedical Research conference this September. Not only were these fantastic learning opportunities, but they provided the structure to network with such a wide variety of research professionals, which I now know to be central to successful collaborative research.”

Liana will shortly be starting as a Research Assistant at the Royal Cornwall Hospital working on haematology and oncology clinical trials and we wish her well in her future career.

A good evening for all in the marquee on the Hoe as first year undergraduate students, postgrads and staff in all the health-related subjects meet up for drinks, magicians and gargoyles. Thank you to our students who posed here: enjoy your course and your time in Plymouth! 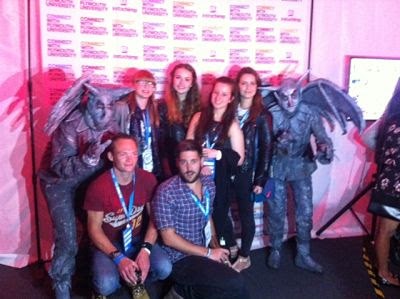 
This is the last in a series of letters from one of our undergraduates, Kati O'Brien, who found funding to work over the summer at Oxford University: see her blog entry on Weds 22nd July.

At the moment, I am busy writing up my results of my project, along with carrying out the remaining statistical analysis; I am required to submit a brief report to the Wellcome trust, alongside submission of my own report to the team in Oxford (which will be good practice for writing up my dissertation this year!) The team has made me feel so at home here and part of the family, and even threw me a wonderful leaving dinner (with lots of cake).

I have had a wonderful time up here, and would thoroughly recommend making the most of any opportunities for research experience.  At the end of stage 1 I carried out a summer research project at Plymouth university, which allowed me to take more of a ‘hands-on’ approach than the taught components in the degree alone provided. Spending this summer in Oxford has further built on these laboratory skills, and has indeed opened my eyes to the more clinically orientated facets of science. It has enabled me to appreciate the vast opportunities that a career in research has to offer, and I would jump at the chance to do it all again!

Once every year the scientists from the Centre for Biomedical Research come together to show-case their current research data to scientists within the university, collaborators and invited external guests.  It was a great honour to have our research day opened by a presentation given by Prof. Siamon Gordon, Emeritus Professor at Oxford University who is a world-leader in the biology of macrophages.  Siamon eloquently set the scene for these innate immune cells and the role they play in immune defence; the function of which is clearly defined by subset and local tissue/cellular environment. 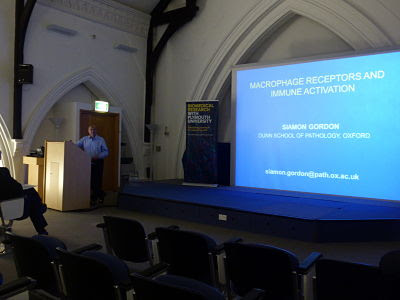 This talk was followed by a series of macrophage-focussed talks from our resident researchers.  Dr Andy Foey (Lecturer in Immunology) had the un-enviable task in following Siamon and presented how subsets of these cells make differential activation/suppression decisions in response to the oral pathogen, Porphyromonas gingivalis, a keystone pathogen in Chronic Periodontitis.  Prof Simon Jackson introduced his latest work on how macrophage functions are controlled through the expression and activity of an enzyme that controls cell membrane fluidity and “rafting” of receptor signalling molecules that respond to bacterial pathogens.  The aim of this work being to create a better mechanistic understanding that may lead to a molecular or cellular-based therapeutic regimen in the treatment of sepsis.  Dr Gyorgy Fejer changed focus to the lungs with MPI, a self-renewing tissue-resident alveolar macrophage cell line which can be used as an in vitro model for asthma and other lung diseases.  This macrophage focus was further reinforced by Prof David Parkinson who described the influx of reparative macrophages upon injury to peripheral nerves and schwann cells.

Changing track somewhat, Dr Matt Upton highlighted the grave issue of antibiotic resistance and his group’s efforts in the search for novel exogenous antimicrobial peptides as a viable alternative to current antibiotics prescribed by the doctor.  Dr Vehid Salih introduced the field of tissue engineering in dentistry; indicating the need for more appropriate 3D modelling in the characterisation of oral mucosal responses.  The growing dental research interests were further represented by the final talk of the day by Dr Sveta Zaric who presented data on the differences in bacterial LPS structure and how these different structures impact on the immune system’s ability to recognise and respond to oral pathogens.
Last but not least......our research students: in addition to the talks, this research meeting included an opportunity for PhD students and Post-doctoral scientists to present their work in a poster symposium. These included presentations from all the research groups within the Centre for Biomedical Research and some of our collaborators outside the centre. The final recognition was given to the best scientific poster prize, presented to Kelly Sillence, one of our final year PhD students who presented her research data focussing on droplet digital PCR technology and its application for non-invasive prenatal testing of sex and blood genetic typing. 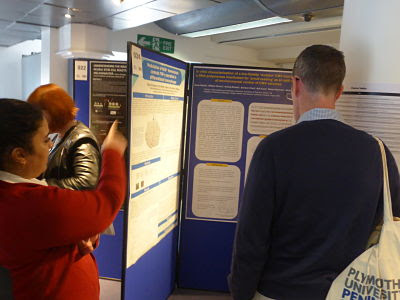 In conclusion, what was nicely demonstrated by this research day is the way that many of our research strands overlap and are converging to develop fruitful collaborations and a truly-interlinking research nucleus that will help the University of Plymouth punch above its weight with respect to Biomedical Research in the future.
Posted by Unknown at 11:39